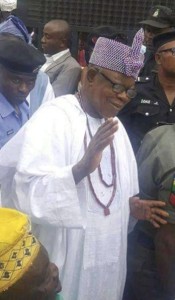 Senator Kola Balogun has described as a pure lie the purported endorsement of Chief Adebayo Adelabu as the preferred candidate of the Olubadan-designate, Senator Lekan Balogun, for the 2023 governorship election in Oyo State.

Senator Balogun, in a statement by his Special Adviser (Media and Publicity), Mr Dapo Falade, said this in reaction to what he described as “a fake news item that has gone viral on the social media”.

The report had it that the new Olubadan endorsed Chief Adelabu as the incoming governor of the state in 2023, allegedly saying “My incoming president, look at this my son, Bayo Adelabu, will surely be elected as Oyo Governor in 2023.”

The senator representing Oyo South Senatorial District, said there is nowhere the Olubadan-designate gave such an endorsement, particularly not when Adelabu was part of the entourage of the APC presidential aspirant, Senator Bola Tinubu, that visited the traditional ruler on Sunday.

Senator Balogun said, in the first instance, he was the one that spoke on behalf of the new Olubadan, adding that there was nowhere he addressed Senator Bola Tinubu as “my incoming president.”

Balogun said: “It is true that a presidential aspirant of the All Progressives Congress (APC), Senator Bola Tinubu, led a team on courtesy visit to the new Olubadan of Ibadanland, Senator Lekan Balogun, last Sunday.

“However, it is a total falsehood that the Olubadan-elect endorsed one of the governorship aspirants of the APC in Oyo State, Chief Adebayo Adelabu, as his candidate for the 2023 elections.

“The falsehood being reported on the social media in that regard is a figment of the imagination of those I can say are well entrenched in the art and act of lying.

“In the first place, Oba Lekan Balogun did not speak during the visit. I spoke on his behalf when Senator Tinubu led his team on the visit to kabiyesi.

“During the visit, there was nowhere I or kabiyesi mentioned Adelabu or spoke of his endorsement as the preferred candidate of Oba Lekan Balogun for the 2023 governorship election in Oyo State.

“I am a senator of the Federal Republic of Nigeria, elected on the platform of the Peoples Democratic Party (PDP). Not only that; I am also strong member of the party. How then can I speak on the endorsement of a candidate for the opposition party?,” he said.

Senator Kola Balogun also said he was surprised that those behind the report could allude to the sitting governor in the state, Engineer ‘Seyi Makinde, as an Ilesa man who cannot be the governor of Oyo State again.

“Again, such an insinuation is not only ludicrous, but also another lie which cannot be defended anywhere. Governor ‘Seyi Makinde is not only a governor, but he is also a performing governor of the PDP, a party in which I am a very strong member.

“Governor Makinde is just like a son to the new Olubadan of Ibadanland. He has access to kabiyesi, up to his bedroom and this a fact that can be verified by anybody who is genuinely interested in knowing the truth about the relationship between the governor and kabiyesi.

“More so, Oba Lekan Balogun is an experienced politician and an academic of repute. He knows the implication of such a false narrative and he can never soil his hands with such a falsehood,” Senator Balogun added.