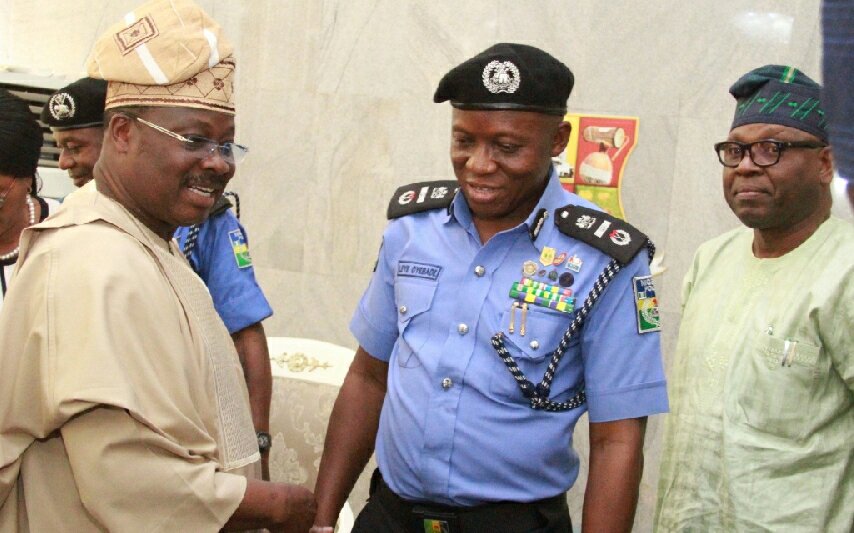 *Ajimobi welcoming AIG Leye Oyebade while the SSG to the State government,

Oyo State Governor, Senator Abiola Ajimobi, has renewed his advocacy for the introduction of state police to curb the pervading armed banditry and insecurity threatening the peace of the country.

The governor restated this position while hosting the Assistant Inspector-General of police in charge of Zone 11, Mr Leye Oyebade, in his office, in Ibadan, on Wednesday.

He appealed to the Federal Government to invest in cutting-edge technology that would aid reconnaissance and intelligence gathering in order to preempt crimes before being committed.

If established, he said that state police would have the benefit of good community relations, adding that increase in the funding of the police force and adequate provision of logistics would also boost the morale of the personnel.

Ajimobi said, “I am one of the pioneer advocates of state police. There is nowhere in the world where crime is effectively combated without state police. We refer to state governors as chief security officers, but we have no control over the commissioner of police.

“Some will argue that the governor will take undue advantage of a state police under his watch. But, do they consider the challenges of having only one person controlling the police in the 36 States and the federal capital.

“Until we do some structural adjustment to the policing system in Nigeria, we may not have the desired results. Having said that, generally Nigeria, and Oyo State in particular, still have security challenges.

“In order to ensure effective and more efficient policing, I opine that the police needs modern technology. Technology must help policing. Look at the developed countries, when a crime is committed, even before it happens the police would have been hinted.

The governor, however, urged the rank and file of the police to change the perception of the masses who did not see the police as their friends as the police would want them to believe.

Ajimobi said the police must go beyond mere sloganeering that they were friends of the people by exhibiting civility, cordiality and friendship in their relationship with members of the public.

In line with internationally established protocol, he said that the police must relate with suspects on the basis of being seen as innocent until they were proved guilty of an offence.

Nonetheless, the governor commended the police and other security agencies in the state, without whose support he said that his administration would not have succeeded in restoring peace and security to the state in the last eight years.

Oyebade, who was a former commissioner of police in the state before his elevation, said he was determined to ensure that the peace being enjoyed in the state, as well as in Osun and Ondo States under his supervision was not truncated.

Judging by the efforts of the present administration in the country and in Oyo State in particular, he said that the Southwest states had shed the toga of ‘’wild wild west’ for ‘wise wise west’.

The police boss told the governor that officers under the zone would benefit from training and retraining programmes, upgrade of police stations to divisional headquarters, as well as firing range training.