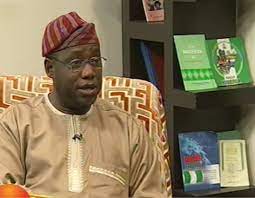 Fresh facts have emerged on the real reasons why some members of Staff of Nigerian Institute of Social and Economic Research (NISER) protested against the Director-General of the institution, Dr. Folarin Gbadebo-Smith on Tuesday, as reliable insiders have informed our reporter that the action of the staffers was misguided and a mission to witch-hunt.
The protesting workers have alleged the DG of embezzlement and incompetence in handling the affairs of the institution and requested the Federal government to replace him.

According to our reliable sources, who would not want his name in print, for security reasons, many of those protesting have an axe to grind base on incompetence, illegal and undue request for promotion, which the DG was not comfortable with.

Dr. Folarin, according to another source in the research institution, has conducted two recruitment exercises upon which he insisted on merit and good performance which did not go down well with some of these people who had their own candidates among those who wanted job at NISER.

They went on to say that the DG is competent to hold the office as a Harvard-trained medical doctor who has strong affiliation with research institutes in Nigeria and abroad.
“It is very unfortunate that this is happening, the DG is a man that came to effect change in this institution, our people have been used to the former rotten system of everything goes but he has insisted on due process since he came, that is why they are up in arms against him.

“It is natural that people will be resistant to change, but this man has made it clear since he came that it is no more business as usual, why would staffers be requesting for promotion they do not merit? Why would staffers be having list of request for employment when those on the list were not qualified?”
Another insider hinted that allegation bothering on embezzlement is unfounded, as all financial transactions in the institution go through the government-established due process and tender board, a system that make all financial infringements impossible.

He added that the name of the DG was brought up by a certain interested parties who would want Gbadebo-Smith replaced with their own candidate, who they would want to do their biddings.

“Some individuals who I call interested parties are behind this protest, they want to see the man leave so that they can replace him or have somebody that is pliable, who they can use to achieve their selfish aims in the institution.

“Everybody in NISER knows knows the procedure to access funding for projects of programmes, they are only trying to taint the image of the Director-General, it is unfair.”
Efforts by our correspondent to get the reaction of the Public Relations’ Officer of the institution was abortive as he was yet to respond to various messages, enquiring into the situation, while the Director-General, Dr. Folarin Gbadebo-Smith was not available for direct reaction.