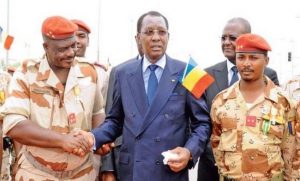 The death of the Chadian President, Idris Derby, has been announced by the leadership of the country’s army.

Derby won the Presidency of Chad for the sixth time and visited Nigerian President Muhammadu Buhari after his victory last week.

He was noted to be a warrior despite being the President and has always been seen leading the country’s troop to fight insurgents and terrorists, a particular case was his leading the team of solders to chase insurgents to the borders of Nigeria and seeking the Nigerian government’s cooperation to chase annihilate the army of terrorists.

President Deby was said to have died of injuries suffered on the frontline, according to the Chadian Army and General Mahamat Kaka, the son of the deceased, has been named interim head of the state.

“Chad is an excellent example of how elections do not a democracy make. Else, how will at the death of its president, his son who is a general is named interim Head of State and the government and parliament dissolved?

“No order of succession in its constitution? By the way, we know that at the end of 18 months, Mahamat Kaka will not be leaving that office. He will continue from where his father stopped,” said Mark Amaza, a social commentator.