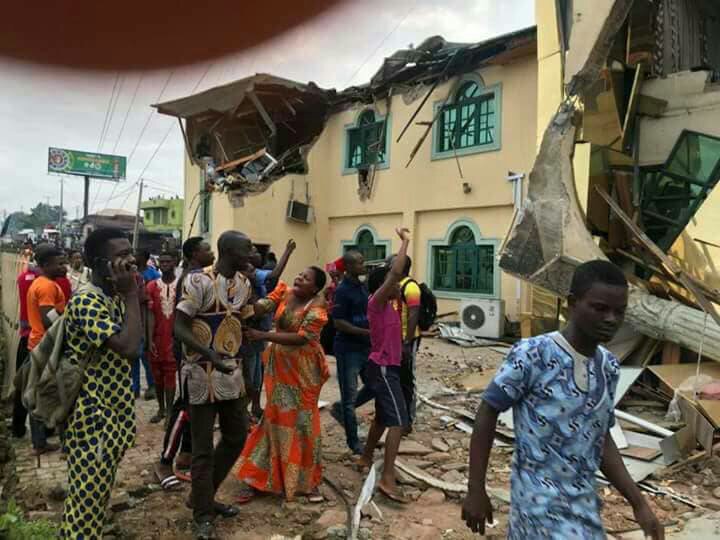 Demolition: DETAILS from closed-door meeting between Ajimobi, Ayefele, with Alafin in attendance

Demolition: DETAILS from closed-door meeting between Ajimobi, Ayefele, with Alafin in attendance

The dust generated by the demolition of Music House, the building which houses Fresh FM, Ibadan, has started to settle following a closed-door meeting between Oyo state governor, Abiola Ajimobi, and owner of the building, Yinka Ayefele on Thursday.

The meeting, it was gathered, was facilitated by a leading governorship aspirant on the platform of the ruling All Progressive Congress (APC) in the state, Mr. Joseph Tegbe. Also at the meeting were David Ajiboye, a director with Yinka Ayefele limited, popular broadcaster, Isaac Brown, and other officials.

Ajimobi was accompanied into the private meeting with Ayefele by Oba Adeyemi, the Eleruwa of Eruwa Oba Samuel Adegbola; Aseyin of Iseyin, Oba Abdulganiy Adekunle; Iba of Kishiland, Oba Moshood Aweda; Onpetu of Ijeruland, Oba Sunday Oyediran among others.

Also at the meeting were Commissioner of Information, Culture and Tourism, Mr Toye Arulogun; the Director General, Bureau of Physical Planning and Urban Development, Mr. Waheed Gbadamosi, who also doubles as the Special Adviser to Governor Ajimobi on Physical Planning and Development Control; the Special Adviser to the Governor on Communication and Strategy, Mr Bolaji Tunji; Tegbe and a few other aides.

A source privy to the discussions told Newspeakonline that, during the meeting, Governor Ajimobi made it clear that it was not a personal issue between him or his government and Ayefele as a person or Fresh FM. Although he expressed willingness to lay the matter to rest, he insisted that the problem was with the building which was partly demolished on Sunday. According to him, the issue is a battle for the supremacy of rule or law and respect for the laws of the land.

The governor reportedly urged Ayefele and his team to mind their utterances and statements made in public on their behalf, pointing out that careless statements escalated the issue but would not deter the government from respecting the rule of law.

The Alaafin who spoke earlier, appealed to the governor to temper justice with mercy on the issue and allow for peaceful and amicable resolution of the matter.

The first class monarch was said to have harped on the need for all parties to forget who was wrong and focus on a peaceful resolution of the crisis.

Reports said Ayefele acknowledged his errors and tendered apologies. He reportedly explaned that all his moves to see the governor before the demolition was unfruitful and that he regretted not coming personally while communicating in writing and by proxy. He was said to have also expressed readiness for peaceful and amicable resolution of the matter.

It was gathered that the meeting lasted about 30 minutes before Ajimobi and the royal fathers left, allowing the government officials to continue with the rest of the discussions.

Newsmen learnt later that a committee comprising government officials at the meeting, was set up to look into the situation and come up with an amicable solution.