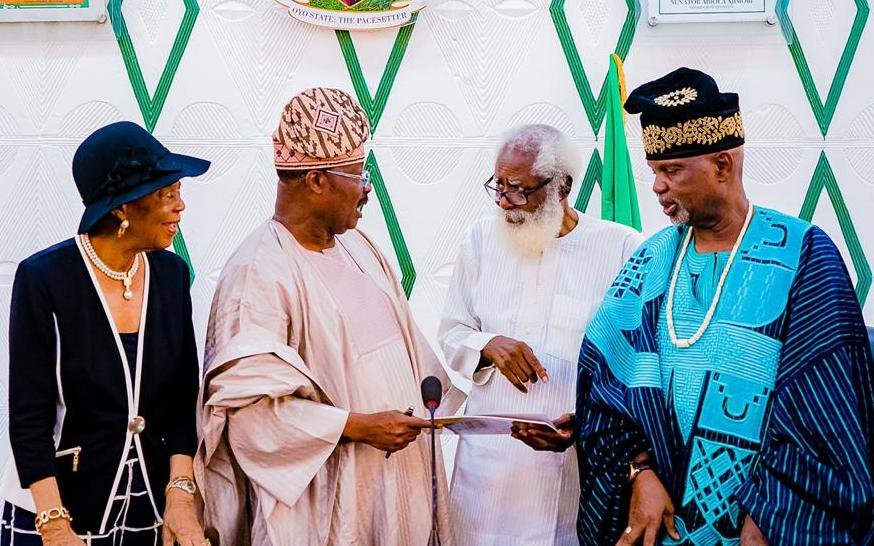 Founding and veteran broadcasters of the defunct Western Nigeria Television (WNTV) and Western Nigeria Broadcasting Service (WNBS), have solicited the support of Oyo State Governor, Senator Abiola Ajimobi, towards spotlighting the first 27 years of broadcasting in the country’s history books.

The broadcasters, who operate under the aegis of First Television (in Africa) Alumni Association bared their minds through the first female Senior Advocate of Nigeria, Chief Folake Solake, who led them to a meeting with the governor, in his office, Ibadan, on Monday.

She said it was anomalous for history makers to attempt to obliterate the years of the WNTV and MNBS in the broadcast industry, which she called an obvious mistake allegedly accentuated by the management of the Nigeria Television Authority (NTA).

Over the years, she said that the NTA had been omitting the years of the WNTV from its anniversary brochures and programmes to the chagrin of the founding broadcasters.

Solanke, who was the chairman of the board of WNTV in 1972, said that history should not be distorted, stressing that the founding fathers of the Western region, especially Chief Obafemi Awolowo, would not be happy with the turns of events.

In putting the records straight, she said that the WNTV had been in existence since October 31, 1959, as the first television station in Africa, before metamorphosing into NTA in 1976, some 27 years later.

To this end, she said that it would amount to distortion not to reckon with the years of the WNTV by correctly adjudging it to be the first TV station in the country, as against the NTA.

To guard future distortions, she appealed to the state government to partner the Federal Government to make the teaching of history more enduring in schools.

“How could they have blotted out those important years of history in the development of Nigeria? The First TV in Africa’s Alumni has come to address that. Their numerous years of contribution to Nigeria’s growth cannot just be forgotten like that.

“We are here to protect history and we have chosen Oyo State to start this effort, because this is where it all started and that is why we have come to solicit the assistance of Your Excellency.”

Speaking in a similar vein, a former Nigeria Ambassador to the Philippines, Chief Yemi Farounbi, said that the WNTV alumni, some of whom also had the privilege of passing through the NTA were pained that their pioneering efforts were not recognized.

He said, “But for the Obafemi Awolowo Foundation that put things in proper perspective while celebrating the anniversary of television in Nigeria nobody else did. We thought we should no longer leave it to the foundation.

“There are so many of us who passed through WNTV. We should bind ourselves together and from the coming 60th anniversary we should celebrate the historically true first television in Africa on October 31, 2019.”

While appreciating the visitors, the governor informed them that his government had made the development of the state possible through security of lives and properties as the bedrock for economic growth.

He said most of the sectors where Awolowo recorded remarkable achievements, like education, broadcast and social welfare programmes, had almost been eroded overtime before his administration revived them.

Ajimobi said, “Oyo remains a state we are passionate about. On our arrival we found out that many of those ‘firsts’ that Chief Obafemi Awolowo founded had been eroded. That is why we started our development plan with restoration agenda, then transformation and repositioning.

“This is why the state is acclaimed to be one of the best five in Nigeria today. We can boldly say that Oyo State is one of the safest states in the country.”

The governor called on the veterans to try and influence the society through a media content that would help change the country for the better, especially the negative usage of the social media.