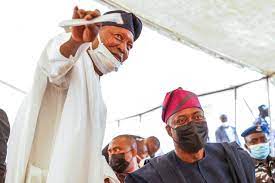 The immediate past Chairman of the People’s Democratic Party (PDP) in Oyo State, Chief Kunmi Mustapha has assured members and lovers of the party that the new national Chairman of PDP, Senator Iyorchia Ayu is capable of piloting the party towards victory in 2023.

Kunmi, who said this in a congratulatory letter, sent to the PDP National Chairman and members of the National Executive Council of the party on Wednesday and made available to newsmen in Ibadan, asserted that the quest for good governance and liberation from the current hardship experienced by Nigerians would soon be over.

He said the caliber of people that made up the executive council of the main opposition party in Nigeria has shown that Nigeria is on its way to freedom from those he said were holding its survival at the jugular.

Chief Mustapha said the vibrancy of Senator (Dr.) Iyorchia Ayu, when combined with diligence and political experience of Ambassador Taofeek Arapaja, who is the Deputy National Chairman, South, among others would surely propel the party towards winning the 2023 Presidential and other elections.

“My heartfelt appreciation message also goes to my great PDP Leader in Oyo State and the entire South West Nigeria, a committed, courageous, visionary, achiever and South West Beloved son in whom we are well pleased, Governor Seyi Makinde, I also congratulate the entire PDP family in Oyo State in particular and Nigeria in general, Praises and adoration be to Almighty Allah for granting all delegates and Party faithfuls safe journey to and fro Abuja.

“The People’s Democratic Party(PDP) is very lucky to have my Leader and friend, Senator (Dr) Iyorchia Ayu, a very Godly, highly intelligent politician, loyal, patriotic, experienced, team player, an administrator per excellence with track records of achievements and lover of women and youth folks, as our National Chairman during this crucial period of our journey to 2023 General Election, With Distinguished Senator Ayu and his able lieutenants, our experienced Board of Trustees and our highly dedicated PDP Governors Forum, I am sure PDP shall win 2023 Presidential election and majority of other elections with wide margins.”

The duo of Senator Ayu as National Chairman and a PDP President shall rescue Nigeria from the present economic crisis and insecurity which we are facing, I am sure that Nigeria’s peace, development, progress and unity shall also be reestablished.

“I want to assure the entire members of PDP South that, by the special grace of Almighty Allah, we shall not regret supporting and voting my dear brother, His Excellency, Ambassador Taofeek Oladejo Arapaja, a thorough breed and grassroot politician who, apart from having been a former active Deputy Governor of Oyo State, had successfully and remarkably served concurrently as Ambassador of two countries, Also on record, is his once been Dean of African Ambassador to the Hashemite Kingdom of Jordan, He is a round peg in a round hole and in his present assignment, I pray that Almighty Allah continue to guide his steps and lift him up higher.

“My overall Party Leader in Oyo State and South Wes, His Excellency, Engr Seyi Makinde, the Governor of Oyo State, deserves my congratulations, appreciation and prayers, His role in ensuring the peaceful and successful organisation and holding of our 2021 National Convention as a workaholic and dynamic Secretary of the 2021 National Convention Organising Committee is worthy of emulation and commendation.

“The convention is the first of its kind in the annals of our Party’s National Conventions, May the Almighty Allah continue to increase you in knowledge, health and always crown your efforts with success.

“Nigerians can now be rest assured of a new dawn of good governance come 2023, the convention has shown to all that the only party with the capacity to deliver Nigeria from the precipice of destruction is PDP and work is ongoing by the new national executives, our performing governors, party leaders and other stakeholders to snatch victory and make Nigeria proud again in economic, social and foreign policies.”

He also saluted the Oyo State Chairman of the Governor’s Advisory Council, Senator Hosea Agboola for his support towards the success of PDP and the incumbent governor in the State.

“I cannot forget the untiring efforts of my dearest brother, Distinguished Senator Hosea Ayoola Agboola as the Chairman, Local Organising Committee of Oyo State Wards, Local and State Congresses and that of the entire Committee members. Kudos to you all, Almighty Allah shall continue to guard and guide you.”

Mustapha urged members of the party in Nigeria and abroad to give the new executive council of PDP the needed support towards achieving a new Nigeria, the people would once again be liberated from hunger and what he called pestilence.