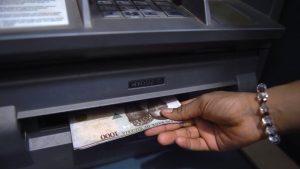 A yet-to-be-identified man was shot dead at the Water bus stop, along the University of Ibadan-Ojoo Road on Monday afternoon, SaharaReporters reports.

Our correspondent gathered that the man, who was shot in his private parts, died at an undisclosed hospital in Ojoo.

SaharaReporters learnt that the man was shot after he withdrew some amount of money from a new generation bank in the Bodija area of the city.

A source in the area told SaharaReporters, “I also heard about it. I saw people parading the area now.”

A viral video on social media shows the lifeless body of the deceased on the floor, around the University of Ibadan on Monday morning.

On Saturday, an unidentified man, killed at the First Bank Automated Teller Machines’ (ATM) point in the front of the University of Ibadan was found on the ground.

He was said to have been killed on Friday night.

One of the sympathisers there told SaharaReporters that the man was likely stabbed to death by robbers while trying to get money from the ATM.

“It is possible the man was killed while trying to withdraw money. It is a pity,”