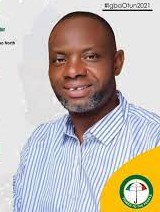 The Chairman, Ogbomoso North Local Government, Alhaji Kabir Ayoade has called on the people of the community to be vigilant about what is happening around them and report strange events to the appropriate security personnel.

Alhaji Ayoade added that having information about students in higher institutions living within the community is also important, so as to know who among them are bonafide students, as different from criminals impersonating as students while perpetrating crime.

The Security meeting was all-inclusive, as it drew various sectors of the society, security agencies and non-State actors residing in the community as was mandated by the Governor of Oyo State, Engr. Seyi Makinde to tackle the increasing rate of insecurity in the land lately.

Among the resolutions reached during the stakeholders’ forum was the advice given by the Chairman of Ogbomoso Parapo, Sakariyau Aremole that job security should be provided for the youths.

The gathering also concluded that a Central  Data  Student System( CDSS) should be established for registered students living in the community as proffered by the Association of Hostels Managers.

Among those present at the event were the leadership of the police, DSS, NSCDC,PCRC, CDC, members of the Vigilante and Amotekun corps, while other non-State actors include NCWS, Miyetty Allah, Chairman, Seriki Fulani,  Okada, Korope. Marwa and PMS.