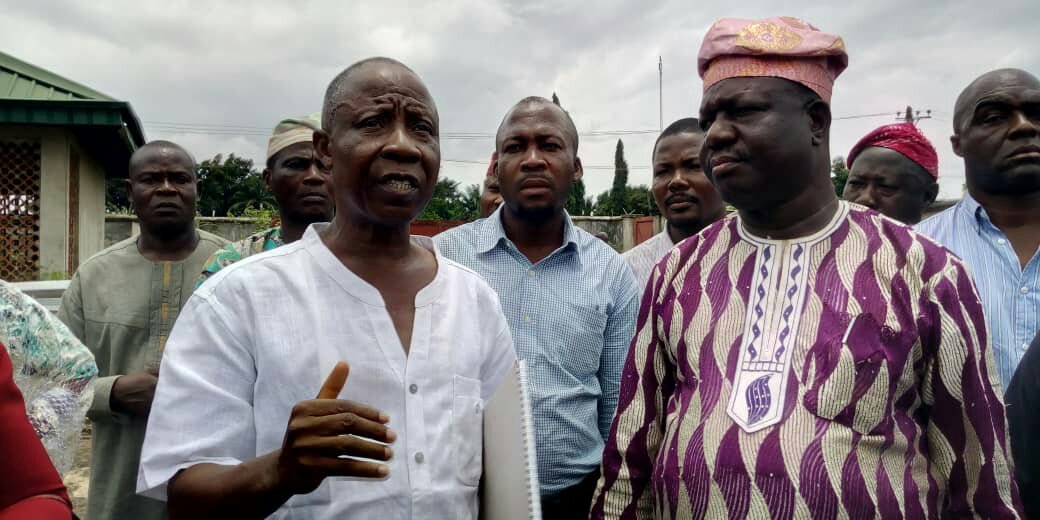 As Govt Settles Litigation on Contract

*Commissioner for Agriculture and Rural Development, Hon Ojemuyiwa Ojekunle, listening to Dr Mufutau Raheem, the contractor at the event

Oyo State Government has directed that the 10,000 metric tonnes of silo project at Aawe in Oyo township be completed by the Contractor, Rahvet International Limited.

The State Commissioner for Agriculture and Rural Development, Hon Ojemuyiwa Ojekunle explained at the silo project at Awe in Oyo that the present government met the project at the stage of incompletion and subject of litigation despite the disbursement of over 98% of total contract sum of by the immediate past administration and the work done till date was adjudged to be 67.8%.

He said the present administration entered into dialogue with all stakeholders to settle the issue amicably out of court as it was in the interest of the State to have value for the huge amount of money already expended on the project.

“The present administration met the contract at 68% completion and a lawsuit which we immediately entered into and settle amicably out of court. The result is what you are witnessing today.

“We have successfully resolved the issue and the contractor is back to site today as documents relating to the contract have been perfected and he is to complete it to avoid waste of scarce resources.

“The contractor has promised that the completion period is five months and after this, we believe that our farmers will be the one to benefit from the project as the present administration is poised to make farm produce available to the people at cheap price.

“The silo will assist in storing 10,000 metric tonnes of grains and other farm produce while it will help in export of farm produce that hitherto have always suffered destruction due to rot as farmers do not have facilities to store in this capacity.”

The Honourable Commissioner charged the contractor to reciprocate the kind gesture of Governor Seyi Makinde, by swinging into action as soon as fund was released to ensure the project would be of good quality and completed and delivered within the shortest period stipulated.

The Executive Chairman, Rahvet International Limited, Dr. Mufutau Raheem appreciated the Governor Seyi Makinde for the opportunity given his company to return for the completion of the project and gave his words of assurance by promising that the project will be completed and delivered at the stipulated period of five months’ time.