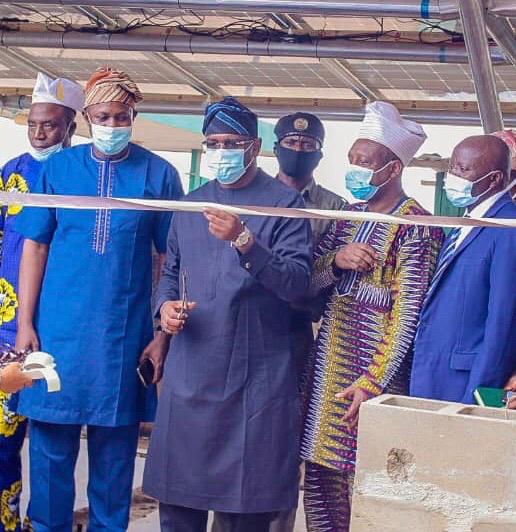 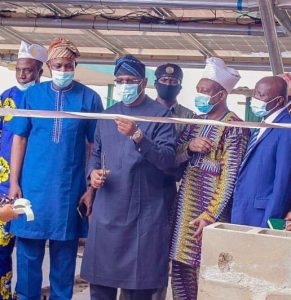 Oyo State government has installed a ten kilowatts solar power facility at the Idi Ogungun Primary Health Center in Ibadan North Local Government area of Oyo State in order to make the activities of the health practitioners in the hospital less cumbersome.

The solar power is expected to provide electricity for the health facility and preserve drugs and equipment from getting spoilt.

While commissioning the project over the weekend, Oyo State Commissioner for Energy and Mineral Resources, Barrister Temilolu Seun Ashamu reiterated the Governor Seyi Makinde-led administration’s commitment to the welfare of masses in line with his electoral campaign promises.

Barrister Ashamu said provision of sustainable healthcare is one of the four cardinal programmes of this administration, noting that there was need to provide stable power supply for primary health facilities since they are mostly patronized by the people, especially at the grassroot.

He called on the people to take proper care of the Solar System and ensure adequate security for it to serve them better, adding that the people should reciprocate the kind gesture of governor Seyi Makinde by supporting his government at all levels.

“This project is going to help give a dependable and stable power to this health facility, as we all know that most equipment they use here are always in need of electricity, the freezers where vaccines and other medical drugs that need a certain percent of cool temperature must be on, while electronics they use should not be without power.

“It is a reflection of the interest of our governor on promoting the healthcare sector, to give our people the desired medical care, which is the essence of a good government.

“We appeal to the community leaders and stakeholders in community development in this local government to give adequate attention to protecting and maintaining this facility from getting spoilt or stolen.”

He said the Light Up Project being of the State government, handled by the Ministry of Energy and Mineral Resources was part of the present administration’s determination to ensure steady power supply to boost socio-economic and commercial activities of the people.

Speaking at the commissioning ceremony, the Head of Local Government Administration (HLA), Ibadan North Local Government Area, Pastor Olumuyiwa Olaoye, commended Oyo state government for the project, which he said would serve as alternative to power supply from the national grid, which could not be relied upon to take care of the electricity needs of the healthcare sector.

A community leader who spoke with reporters at the commissioning, Hon. Ayedun Adio was full of praises for the incumbent administration in Oyo State for keeping up with the expectations of the people and fulfilling the promises made to them during the campaign period, prior to 2019 general elections by Governor Seyi Makinde.