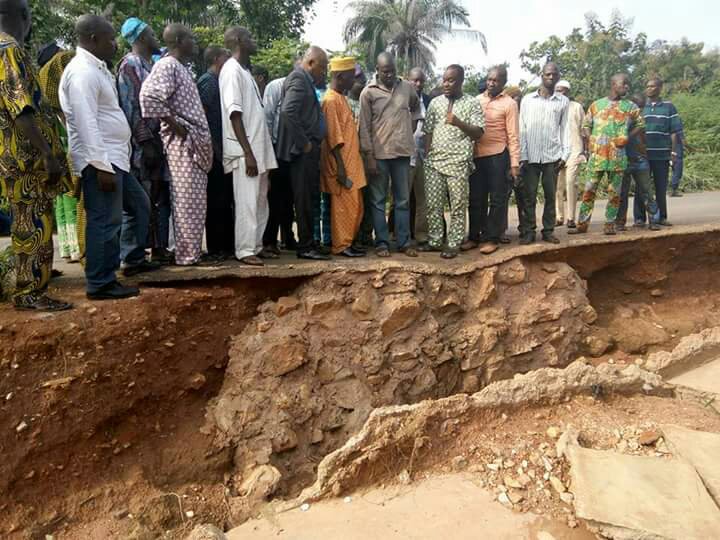 The Oyo State Government in partnership with Ibadan Urban Flood Management Project (IUFMP) has reeled out palliative measures aimed at ameliorating the risks associated with flooding occasioned by overflow from streams and rivers in the State.
Speaking at one of the sites affected by flooding in Aba Eleshin Bridge at Jakanta road in Apata, Ido Local government in Ibadan, the Commissioner for Environment and Natural Resources, Hon. Kehinde Ayoola reiterated the commitment of the Oyo State government towards addressing flooding and other environmental challenges confronting the State.
The Commissioner while on the inspection tour noted that in addition to the efforts of the State Government towards constructing the bridge among others, residents of the community also have major roles to play in ensuring that they desist from the act of indiscriminate dumping of refuse under the bridge in order to avoid hazards associated with such act.
“Government will soon start the construction of the bridge here to safeguard lives of the people. This is on the part of government, people also must change their attitude towards their environment, to this end, every household is expected to have a drum that would contain their wastes and engage the Waste Management Authority for proper collection of their waste.
“These measures are not only targeted at the present season but for the future so as to cut the cost uncured on emergency services during disasters caused by flooding as well as to safeguard the lives of the people.
“We urge residents to develop strong aversion for bad attitude like indiscriminate dumping of refuse in drainage and waterways which usually cause flooding,”he added.
Meanwhile, the Project Coordinator of Ibadan Urban Flood Management Project, Mr Dayo Ayorinde called for support from the community in ensuring that Oyo State remained environmentally safe for all residents.
Mr Ayorinde said that the Aba Eleshin bridge would be captured in the master plan of drainages to be considered under the special intervention of the State Government while also stressing that following the 2011 flood disaster in Oyo State, the IUFMP has been repositioned to identify areas affected by flooding in the State.
He thereafter charged the community to constitute a group of volunteered individuals that could ensure restriction of movement of persons during heavy rainfall in view of the forecast on the possibility to continued rainfall between the months of September and October.
He also stressed the need to mount signposts with inscription, notifying passers-by of the dangers one could face when navigating through the road.