Oyo To Promote, Honour Teachers According To Students’ Performance 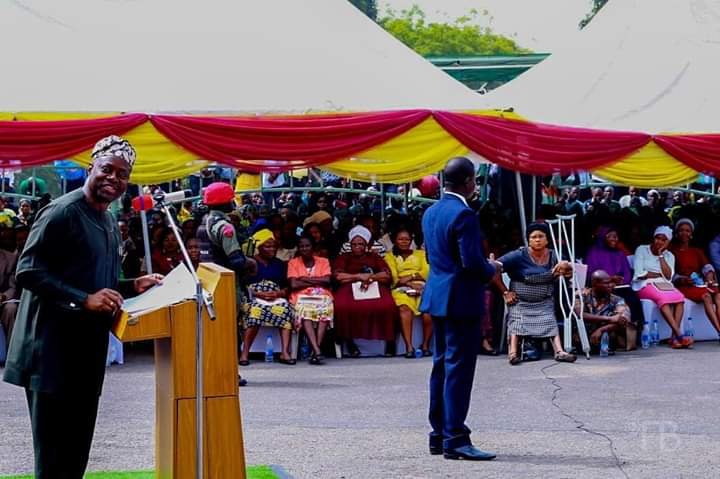 *Gov. Seyi Makinde
Oyo State government has declared that public school teachers would henceforth be promoted and honoured according to their diligence and efficiency , as reflected in the overall performance of their students in external examinations.
The declaration was on Wednesday made by the Chairman, Oyo State Post-primary Schools Teaching Service Commission {TESCOM}, Pastor Akinade Alamu at an Interactive session he had with School Managers, Saki zone, Oke Ogun, that was held at main hall of Ansaru Deen High School, Saki, as he hinted that a committee has been set up by the Governor, Engr. Seyi Makinde to have data and measurement of individual teacher across the State after which he would personally award the most efficient among them.
He said promotion of teachers would no more be ‘business as usual’ as the State administration has concluded plans to award excellency, based on measures of efficient and productive input by teachers to make their students excel in external examinations, adding that workers’ remuneration that have always been a major cause of worry before the Seyi Makinde administration came to office has been overcome.
”You can see that our government is a listening one, we are here today to have some feedback, tell us which area we need to improve as government and I can assure you that era of unpaid salary has gone forever as this administration will continue to make prompt payment of salary its priority.
.
“In the last promotion that we did where over eight hundred (800) teachers got promoted, there were no report on the beneficiaries, everybody was just moved together at the same time, though we believe our teachers are noble, good and hard-working but we may have some bad eggs, who are lazy and might have might have scaled through without been qualified and the hard-working ones will be feeling cheated.
“This is why we are contemplating that at the end of every year, there must be reports on our teachers’ conducts and activities, teachers that are sanctified to be good and efficient need not wait for general promotion, they will be promoted and honoured as at when due.”
According to the Chairman, the interactive session which had started with Saki Zone is to be held across the Six Zones in the State and was meant to maintain a good rapport between the Commission and its teachers.
Earlier in her welcome address, Saki zonal head, Deaconess Aderonke Oladoyinbo appreciated the giant stride taken by the present government under the leadership of Engr. Seyi Makinde towards improvement of the educational sector.
“This government is playing a great role to ameliorate the plights of teachers and even students by regular payment of monthly salaries, 13 month even paid, issuance of car loan to teachers, mass promotion of teachers that have stagnated on GL 15, provision of almost 23% of State Budget on Education, free distribution of note and textbooks, intervention classes and many more.”
Oladoyinbo then called on teachers to reciprocate the good gesture of the present administration and cooperate with the government by being efficient at their duty posts.