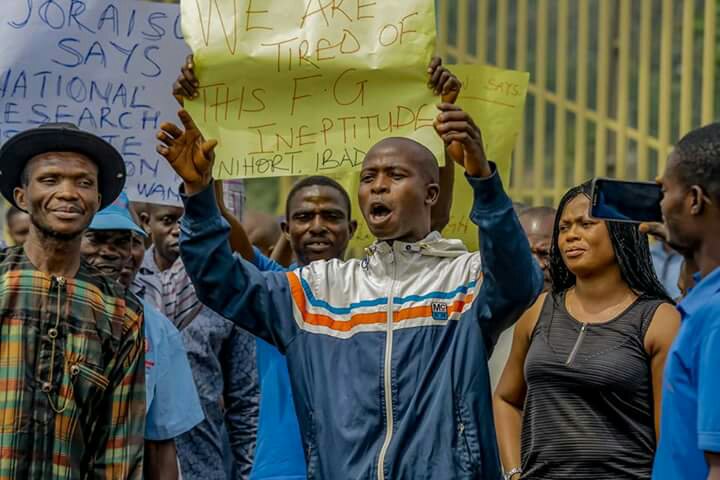 An unjust social order is characterized by deprivation and dehumanization of the common people who are in their millions. The order is crafted in such a way that more resources are given to less people while less are given to more people. Isn’t that a contradiction?

If God were to be man and man God, only God Himself knows the number of times rain would fall in the remotest part of Ikere where the peasants are domiciled. Or perhaps he is to be visiting settlements, I am sure his soldiers-angels would never allow of him to enter the ghettos. The only one who will see his face and receive his generosity would be those residing in the GRAs, or Lekkis or Bourdilons where the rich live. But thank God, man is not God. Unfortunately for the oppressed, they are only united in poverty as dehumanization take tolls on their faces but divided in their stomachs. If you see them, you know them by the way they look – ravaged by hunger, always struggling for survival.

They want to be like their master servants and oppressors. And once they have the privilege to scavenge on the dustbins of their slavemasters, they forget where they are coming from. Now that their stomachs are fed, another oppressors are birthed.

This is the state of dilemma where the common people find themselves yet unknowingly, the oppressors have continued to take the advantage to advance and protect the source of their influence. In case the hunger cards are not working, the political cards would do, or the religious cards or ethnic divisions. Common people who already are impoverished can do the unthinkable because of all these.

They can begin to kill themselves. They will forget instantly that they belong to the same class -the poor.
In Nigeria, what is known and referred to as the middle class have been murdered and buried long time ago. What we have now are the rich and the poor. The salary earners have been reduced to a state of perpetual borrowers and sometimes beggars.

The okadaman, the taxi driver or the tomato seller in the market are all better than most of the salary earners. The money they make per month is in multiple of what an average salary earner takes home. And if you make bold to fight for wage increase, you will need to confront your fellowmen in poverty who belong to party A or B as they bark at you to not expose the ineptitude of their leader. Then, that tomato seller and the okadaman would never share your pains because you are paid salary and they are not. Smile…they forget that they do not manufacture money neither do the ruling class ride on their okada.

Then, your employer insists that you find something else to do to live and survive aside the salary you are paid. Our brother can even say, ‘Go and resign if you are not satisfied!’ Your employer would never remunerate you enough while it pays bogus emoluments to self. They forget that this country belongs to all of us – the wealth, the resources and everything. Maybe these attitudes are the killers of productivity and efficiency. It’s very pathetic that the clothes which do the odd jobs are kept on the farm – sometimes unkempt.

What actually spurred this thought was the conversation I heard of two men yesterday whom I later discovered to be meat seller and oil seller. They were actually cursing the Nigerian workers who are threatening to downtool.

One had said, ‘I heard there would be labour strike on Tuesday. These people will paralyse everything again’. The other said, ‘Don’t mind the useless people jare. Who cares? Instead of fighting for reduction in the prices of commodities, they are fighting for increment. To whom will their salary increment benefit?’

I pitied the two men and walked past them.
Well, before I go, permit me to exhume the thought of Penkelemesi -Adegoke Adelabu
For wants of what to write, in search if inspiration, I had stumbled on this thought and I found it very interesting and apt for this discussion. I hope you will enjoy it.

They are all in all, and they are everywhere. But first I will tell you who they are not. They are not the All-powerful One, the Big Ten, the Influential Hundreds, the Thundering Thousands, the Clamorous Hundreds of Thousands, the Vocal Few.

They are the teeming hordes, the dense crowd, the sweating masses, the mute multitude, the dump assemblage, the timid rank and file, humanity in aggregate. They toll in the fields, they sweat in the workshops, they bargain in the bazaars, they worship in the church, the mosque and the shrine, the dance in processions, they riot on the streets, they revel in the pubs.

They are the farm-hands in cocoa plantations and cassava plots, the sweating labourers in quarries, the deckhands on boats and shanties. They are the hewers of coal at Enugu, the diggers of gold at Ilesha and the miners of tin at Jos. They are the manual workers in ocean ports, railway sheds, motor garages, and air terminuses, the cowherds on Hausa ranches, the scavengers of drains, the workers on night soil, the sweepers of markets and parks, the drudges in workshops, yards and kitchens. When you see them, you know them – the big hands, the stumpy build, the tough physique, the ungainly carriage, the drab dress, the restless movement, the valuable talk and the loud oaths.

They are known by their wants, distinguished by their disabilities and conspicuous by their incapacitations. Not for them the vocational equipment, the restraining discipline, the acquired taste, the broadening experience, the delicate refinement, the graceful manners and the ennobling and seasoning influence of education.

Their speech is harsh, their manner coarse, their opinion hard and their horizon circumscribed… They wallow in dirt. They groan in pain… They live on cereals, bread like beast and multiply like mammals…

They worship wizard, witches and whores. They believe the incredible, the freak, the fantastic. They bow down to wooden idols and cringe before graven images.
…they know not and know not that they know not. Departmental votes are increased annually in their interest, to no visible purpose.

Legislators swell in number and in composition but all we get is more talking and very little action…
The remedy for the ills of the poor is within and not without him. You do not reform a sinner by fawning on him but by resuscitating his conscience to revolt against his own misdeeds. It is derogatory to the dignity of human personality to ameliorate his condition by almsgiving. The manly moral remedy is to inject into him the poison of resistance against oppression; to encourage him to fight for his own right; to instigate him to rebel against tyranny; to incite him to prefer death to starvation….

In conclusion, he said, ‘Nigerians! Wake up and fight for your own rights! Freedom is a battle to be won, it is not privilege to be conferred. Your destiny is in your own hands’.

That was the man Adelabu speaking about the silent millions in similitude to Freire in Pedagogy of the Oppressed. And I begin to reflect as to when these perpetual servitude, suffering and smiling would end. They have come of age. Many years have passed, yet the story has not changed except the dramatis personae. Fela sang about the need to halt the drift.

Sikiru Ayinde sang about it.

The tragedy is that the poor peasants can not fight for themselves. Unfortunately, when they see someone staging a fight to their advantage, they often antagonize.

Isn’t it said that a house divided against itself cannot stand? I only pray that the journey of one hour from Lagos to Ibadan which Barry sang would not land the passengers in lagoon if the driver is drunk, deaf, dump and blind.
A word, they say, is enough for the wise.